You may have noticed that it’s been awful quiet on the Flashy Glove Save front. And there is a perfectly good reason for that!

Today, the guys from Russian Machine Never Breaks have opened a sister site, Sweetest Hockey on Earth, that will cover the Hershey Bears. I am honored and excited to announce that they have asked me to write for this site.

The website is amazing and I suggest that any and all Hershey Bears fan bookmark the website because it’s going to be great! We’re going to bring Hershey the attention it deserves!

So while I’m sad that I’ll be abandoning my little blogspot, I’m absolutely thrilled to have this opportunity to go on to bigger and better things! And who knows, you may still see the random entries here and there on Flashy Glove Save. It’s not goodbye, it’s see you later!

Apologies for the delay in getting this up. I had to accomplish a lot of non-blog things yesterday. 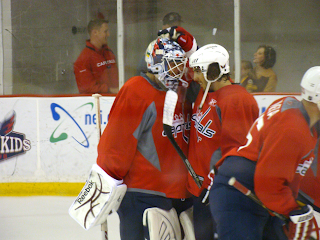 Sunday marked the start of the Duchesne Cup scrimmages. The three teams battled for the coveted title, named in honor of Gaetan Duchesne, a former Capital. Team A had a early morning practice while Team B and Team C played the first game of the tournament.
It was a decisive victory for Team C, boasting pla
yers such as Mike Green, Eric Fehr, Andrew Gordon and Braden Holtby. Team B just could not find a way to click. Their passes didn't connect and their shots soft and easy. In the end, Team C annihilated 5-0 with goals from Andrew Gordon, Brian Fahey, Jason Chimera, Eric Fehr, and Mathieu Perreault.
As always, for the full collection of photos, I direct you to my Flickr page.
Read more »
Posted by Kathryn H at 3:51 PM No comments: 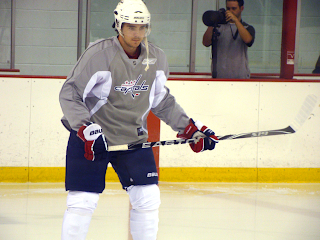 These pictures are from the first day of Caps Training Camp! Each group (labeled A, B, and C) took turns on the ice. Each group did the same amounts of drills. It was great to see the boys back in town. Here's a selection of photos from Saturday. For the full collection, check out my Flickr page.

This is going to be the final player profile of the offseason. I’d appreciate feedback from you guys that have been reading. Let me know if you liked this “Meeting the New Guys” series and/or things you would change, etc. I hope you feel more informed about the team this upcoming season.

Braden Holtby is most likely to be sharing this season’s games with Dany Sabourin, a veteran AHL goalie who has also seen a decent amount of NHL games. Let’s say hello. 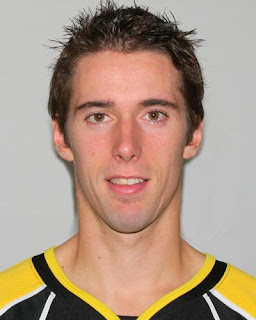 I know that many people (myself included) are itching to see Braden Holtby play a game or two in the NHL. And if one of the goalies gets a minor injury, he is likely to be the one they call-up. But if one goalie goes down with a long-term injury or if (god forbid) both are injured, expect to see the team turning to Sabourin to take on the workload. At least until they know they can rely on Holtby.

On July 1, 2010, he signed a one year, two-way contract with the Washington Capitals. CapGeek.com lists his salary as $250,000 in the AHL and $525,000 in the NHL. Taking a look at Sabourin’s professional career, he has played for 6 AHL teams and 3 NHL teams. When he played for the Vancouver Canucks in 2006-2007, he saw playing time during two playoff games, once when Luongo was pulled and once when he needed to…attend to something off-ice. He played a total of 57 games at the NHL level. He averaged a .854 save percentage for those 57 games.

During the 2005-2006 season with Wilkes-Barre/Scranton Penguins, Sabourin won the Aldege “Baz” Bastien Memorial Award. Every year this award is given to the goalie determined to be the best goaltender in the league. Basically, it’s the AHL version of the Vezina trophy. His statistics for that season included a 2.26 goals against average and a .922 save percentage. 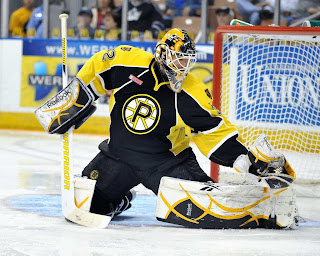 To get a better idea of what kind of goalie we’re looking at, I enlisted the help of Providence Bruins fan and expert, Sarah Connors (of Something’s Bruin):

For fans, last season was an especially frustrating one. Our team didn't make the playoffs for the first time since the late 90's, our scoring struggles were just as drastic as Boston's, and our talent pool was stricken by injury and callups, moreso than usual because of injury to the big club right up I-95.

One bright spot, however, was Dany Sabourin, your future Bears goaltender.

Last year was a record-setting year for Mr. Sabourin's personal statistics. He started 57 games to the oft-injured Kevin Regan's 21, and played over 3000 minutes, something he'd never done before, even at the age of 30. The closest he'd come previously was his year with the Pittsburgh/WBS Pens, in 05-06, when he started 50 games. He's played in 57 total NHL games, and last year often carried the struggling P-Bruins on his back, often making 30+ saves in a night. He's solid in net, and is a good veteran presence; the Bears' younger goaltenders will learn a lot from him.

Fun fact - Sabourin did not lose a game in OT all season. His 28-27-0 record does not reflect how well he played at all - he has 's fail of an offense last year to thank for that. In January alone, he went 5-5, but his GAA was 1.94. He'll be good insurance if your defense isn't stellar, and paired with the perennially goal-happy Bears offense, you should be good to go. 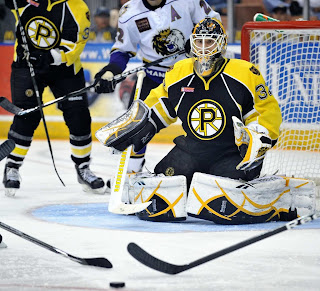 In order to endear him to the Washington/Hershey fans some more, here’s a video of him making a highlight save against Mike Richards during a shootout.

Apparently he’s also a fan of PSP. I ask forgiveness for linking a Penguins video… 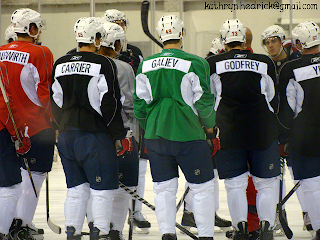 As some of you may already know, I attended rookie camp Monday morning and then watched the veterans informal practice. My buddies over at Russian Machine Never Breaks were kind enough to let me write up a post about Monday's session. Definitely check it out because I also posted some of m favorites pictures that I took during my visit.

And, in the name of fairness, I'll post a couple more photos here. You can view my entire collection of photos on my Flickr. I hope to be around for a lot of training camp so come say hi! 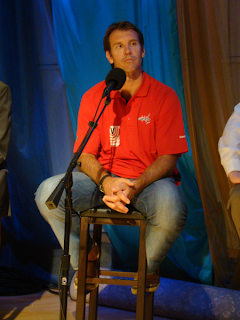 Mike Knuble at the XM Studios Premiere of Hockey Diaries
Thanks to some excellent timing and my ability to retain pointless hockey trivia, I was lucky enough to attend the premiere of Media Chameleon’s “Hockey Diaries: The Almost Season” at the XM Studios in
I happened to be hanging on Twitter at the exact moment that the Capitals gave away tickets to the first five people who could name Karl Alzner’s dog (Murphy, for the win!). So tonight, I found myself making the trek to XM Studios in D.C. 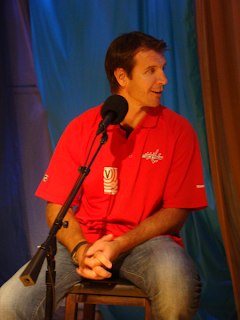 Mike Knuble listening to the other panelists

This year's Hockey Diaries featured the voices and thoughts of Mike Knuble and Tyler Sloan. If you didn’t listen when it aired, you definitely missed it and should check it out soon. I mean, who knew Tyler Sloan had so many feelings? Hockey Diaries gives an unparalleled look into the minds of hockey players. They open up and you don’t hear just the standard responses that they recite to the locker room media. The contrast between the emotions of a veteran and rookie going through the exact same season is so intriguing. Both Knuble and Sloan mentioned that they found it therapeutic at times to have a way of venting their frustrations. Their feelings are so genuine and resonate with all the fans who are trying to understand what their heroes are thinking. 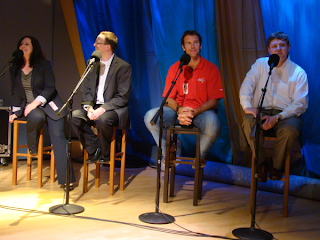 The panel Q&A was incredibly insightful. Not only from Tyler Sloan and Mike Knuble, but added input from producers Gemma Hooley and Chris Nelson truly enhanced the behind the scenes information about the documentary. It was a lot of fun being in a crowd of Caps fans while you listened. Together we all laughed at the players’ antics and mourned over the sudden end to our season.

I’ve got to say…one thing that I really learned from hearing the show tonight: it still hurts. Even after all the months, it still really pained me to hear the raw emotions after being eliminated from . At one point, I wanted so bad to get up and turn it off because I didn’t want to hurt about it anymore. But, as my wise friend, Caitlin, quoted from “Lion King”: “It doesn’t matter, it’s in the past.” And the first step to recovery is rookie camp. Thank goodness it starts Sunday! 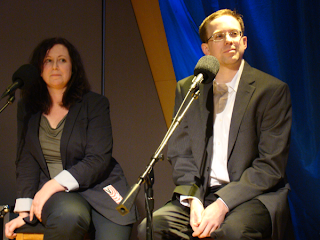 I have to give many thanks to the Washington Capitals staff for giving me tickets to the premiere. And an even bigger thanks belongs to Media Chameleon for continuing to give us such a great look at our favorite players. Their coverage just can’t be beat. Now I have to say, Matt Bradley and John Carlson would make an excellent third installment of Hockey Diaries!

All photos are my own work. You can see more at my Flickr.
Posted by Kathryn H at 10:39 PM 3 comments:

I've got enough time to do a couple more posts before all the camp mayhem begins, so here we go! 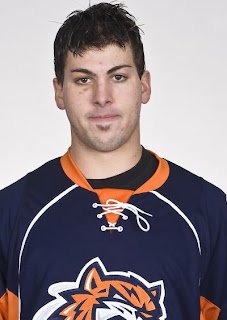 He has played 21 NHL games so far, 17 in the 2008-2009 season and 6 in the 2009-2010 season. And, in those 21 games, he’s fought, um, EVERYONE. I’m not kidding. Just one YouTube search of his name and you’ll find more than 10 pages of his fights. He even takes on the big guys like Wade Brookbank, Riley Cote, Georges Laraque, Zenon Konopka, and our very own John Erskine. You can find a couple of said videos at the end of this post. As you might expect, he doesn’t score very many goals…pretty much none, in fact.

But let’s focus on the positive! Much like the Caps adding D.J. King, we’ve got an enforcer for Hershey! Nicknamed “Wrecker,” he had 128 penalty minutes in just 21 games with the Bridgeport Sound Tigers. In the 2008-2009 and 2009-2010 seasons, he got 68 penalty minutes and 27 penalty minutes, respectively, while with the Islanders. 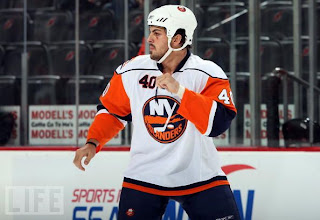 Rechlicz signed a one-year, one-way contract with Hershey on July 29, 2010. In 2008, he signed a 3-year contract with the New York Islanders. However, this past summer, they mutually terminated the contract and he was placed on waivers and became a . When he signed with the Islanders, he became the first player from the International Hockey League to make it to the NHL.

I’ve got to say, for being a “tough guy” he can be a bit of an…interesting fighter. While watching a lot of his fights, he makes this pawing-like motion during the moments before the first swing. And, while pawing away, he and his opponent circle each other for quite some time. Sometimes it ends up just being more of a hug than a fight, but that happens to the best of us. Or maybe he’s just trying to hug it out? In all seriousness, he packs a good punch and can stand his own, even against the NHL veteran enforcers. 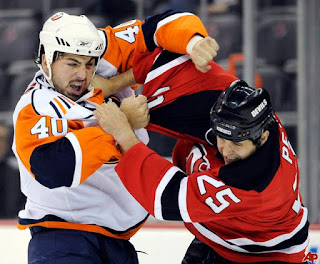 I love me some hockey fights. Here we go, Joel Rechlicz, everybody!

Rechlicz even fought Brashear while Brash was in Hartford, so that's fun.

And finally Rechlicz fights Michael Rupp and does some gymnastics.

If you'd like to support Flashy Glove Save or Photography by Kathryn, donations are gladly accepted in any amount. Thanks!